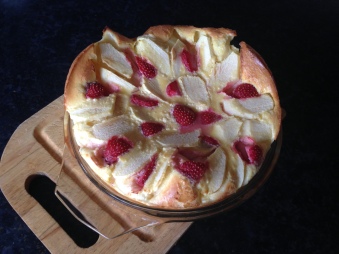 At the weekend I love to try something different for breakfast (anything is a change from my usual porridge anyways) so I usually make pancakes. I have two pancake recipes that I have discovered in the last year that I love and both are quite different to the usual pancakes that I would have made. The first one is a baked pancake and the second pancake is banana pancake.

So I was introduced to these pancakes last Halloween at a friends place. As we sat down for a coffee, she mentioned that her husband was going to make pancakes for breakfast, it was a recipe from his great-grandmother. I couldn’t wait to taste it, I love any excuse to try new food and get some new recipes too of course. He had it whipped up in no time at all and then went to pop it into the oven at which point I was very curious, what kind of a pancake is this? Out it came, it was so puffy and dotted with lovely autumnal berries, so I dived right in, well my fork and knife did anyways. It was delicious, so light and fruity. When my friend suggested making another one I didn’t protest and my baking antennae went up as I watched more intently and wrote down the recipe later from my friend. From that day onwards I often whip up this pancake.

Put a knob of butter onto a Pyrex dish lid and put it into the oven to melt. While you’re doing that you can prepare your fruit. I like to add apples and strawberries, but you can add any kind of fruits to this, you could also put in a little vanilla extract if the fruit needs a little sweetening. I added in apples slices and sliced strawberries. Pop it into the oven for about 17-20 minutes, depending on how hot your oven is. You can spend this time popping the kettle on and admiring how much the pancake rises, it’s great fun watching it puff up.

Once you’ve admired your pancake in all it’s puffiness you can cut it in half, quarters etc and serve it drizzled with maple syrup, buen provecho.

I found a banana recipe online a few months ago and it had two main ingredients, one banana and two eggs. I took that recipe and adapted it a little. I mashed one banana with a fork and then whisked the eggs and mixed them into the banana mixture. I added a splash of coconut milk (about a tablespoon and a half), a small handful of oats, a handful of blueberries and a teaspoon of honey, give it one more mix. 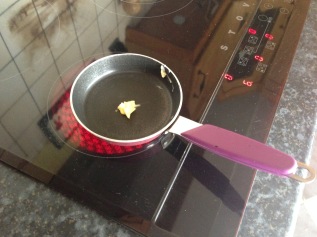 I use a teeny, tiny frying pan to cook these pancakes, you could use a frying pan or a wok either. Add in a knob of butter and put it on a medium heat, once melted add in two heaped tablespoons of the mixture and cook the first side for a few minutes and then turn it over.

So the first pancake is always a bit of a disaster, right, haha. The next few that followed were flipped over with a little more finesse. I usually leave the finished pancakes in the oven on a low heat. Once all done, stack them one on top of the other and then dig in.