While I was watching the GBBO last week I decided I’d take on the challenge of baking one thing from the show each week, it will give me the opportunity to try out different recipes that I normally wouldn’t and it’s a great excuse to combine two loves baking and GBBO. So after week one I thought I’d try the Genoise sponge as I’ve never made this before. I browsed google for a few recipes and finally settled on Paul Hollywood’s Summer Fruit Genoise, (http://paulhollywood.com/recipes/summerfruit-genoise/) especially as it was a particularly sunny day out, which is a rarity in Ireland. Here is how I got on with his recipe and my first trip down Genoise lane.

Firstly preheat the oven to 180C, grease two 20cm tins with a little of the 30g of unsalted melted butter. Put 4 eggs and 125g of caster sugar in a bowl over a bain-marie and whisk with an electric hand mixer for around 5 minutes or so until it is pale and thick enough to hold the figure of eight. Take the bowl off of the bain-marie, sift in 125g of plain flour with a pinch of salt and fold in gently. The final step is carefully folding in the melted butter. Spoon the mixture evenly between the two tins and bake on the same shelf for 25 minutes until golden and it has slightly shrunk from the sides of the tins. 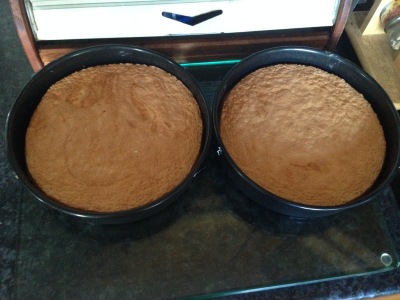 Leave to cool in the tins for five minutes and then carefully transfer to a wire rack to cool completely. While you’re waiting for these to cool you can make the strawberry cream. When I read about this cream I could not wait to make it, it’s so simple but absolutely delicious. Blend 200g of strawberries (hulled and halved) with 2tbsp of icing sugar, taste it and if you want it to be sweeter you can add more icing sugar, this was plenty sweet for my taste buds. Whip 250ml of cream until it holds soft peaks and then fold in the strawberry purée roughly, the mixture should be rippled rather than all pink. 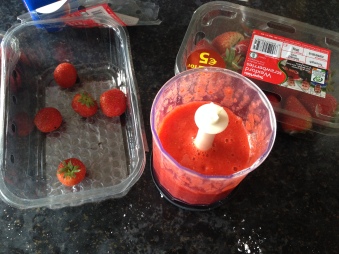 Now to decorating the cake, one of the best parts. Slice both cakes horizontally (I use a cake leveller) and leaving the cut side up spread a third of the strawberry cream onto it and decorate the edges with raspberries and blueberries, continue doing this for the next two layers. 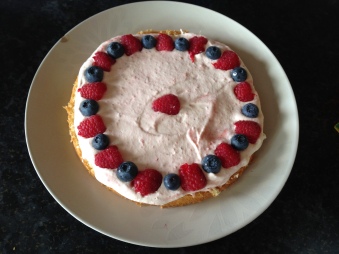 Dust the top of the cake with icing sugar and decorate with raspberries, blueberries and strawberries.

The resulting cake was sliced and eaten with a lovely cup of tea, yummy. After finishing my slice I had a few thoughts of what I would do next time. I’d probably add some desiccated coconut or vanilla extract to the sponge mixture. I wouldn’t use as much cream in each layer, I would leave some on the side to be enjoyed with the cake. Other than that I was quite happy with my first try. I’m looking forward to the next GBBO challenge.

2 thoughts on “The Great British Bake Off Challenge”