This week I came upon an unusual cake while doing a little baking research and I decided to give it a crack, after all it’s good to challenge yourself every now and then. So the recipe in question was a toffee popcorn cake that I found on http://lapechefraiche.com/pop/. The cake is a yellow cake, which I’ve never made before, iced with a meringue caramel buttercream with caramel sauce drizzled on top and toffee popcorn on top. I took the basic idea and used tried and tested recipes for the buttercream icing, caramel and the toffee popcorn and so I began. 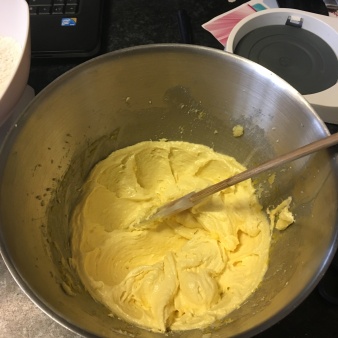 I preheated my oven to 160C (fan) and greased and lined two 8″ round tins. I creamed 170g of butter with 264g of granulated sugar until it was fluffy. I mixed in 6 egg yolks, one at a time, followed by a cup of milk and 2tsps of vanilla extract and mixed until well combined. Finally I stirred in the dry ingredients; 300g of plain flour, 2 tsps of baking powder and half a tsp of salt. I spooned the batter evenly into the two tins and baked it in the oven for about 30 minutes. It states 20-25 minutes on the website but my cakes definitely needed a little more time. Once the cakes were ready I left them to cool and started making the salted caramel.

I took the salted caramel recipe from http://sallysbakingaddiction.com/homemade-salted-caramel-recipe/. I particularly love how there is a little video and plenty of pictures with this recipe so you know exactly what your caramel should look like at each stage. This does take quite a bit of time and patience but by God is it worth it at the end. I put a cup of granulated sugar into a saucepan and stirred it continuously over a medium heat until the sugar had completely melted. The sugar clumps together and eventually looks like the picture below on the left: 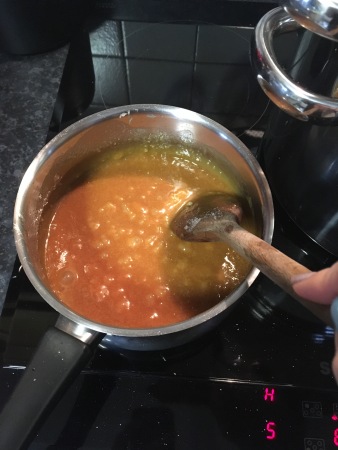 I stirred in 90g of butter until it melted and then I carefully poured in 120ml of double cream and while it boiled I stirred continuously for a minute. I added in a good teaspoon of sea salt and mixed again. For these steps the mixture tends to bubble rapidly and splatter so be careful. I poured the caramel into a jug and left it to cool, tasting plenty of it while I was doing so, of course. 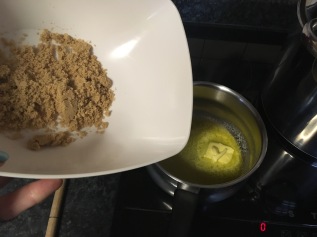 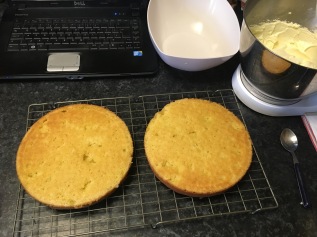 Next I whipped up some buttercream by mixing 300g of butter with 500g of icing sugar until combined, I poured in 4tsps of hot water and 4 dessertspoons of milk and continued to beat it until it was soft. I poured in half of the cooled down caramel and mixed it through quickly. I left it in the fridge as it was quite soft. Now I cheated a little when I made the popcorn, shame on me I know. I wanted salted popcorn so instead of making the popcorn with kernels I bought some salted microwave popcorn and 3 minutes later the kitchen was filled with the smell of freshly popped popcorn. I melted 40g of butter in a saucepan, added in 40g of brown sugar and 2 tbsp of golden syrup and stirred over a high heat for about 2 minutes. I poured the toffee over some of the popcorn and stirred it in as quick as possible and left it to set. Now for the finale, assembling the cake.

I placed one layer of the yellow cake on the plate and spread a layer of the caramel buttercream on top. After placing the second layer on top I spread the buttercream all over the cake, including the sides. I evened it out a little with the spatula and then poured the caramel over the top and let it drizzle down the sides. Finally I sprinkled the top of the cake with toffee popcorn pieces.

The cake was lovely and moist and not half as sweet as I thought it was going to be however, it is quite a rich cake. I would definitely try it again as there’s plenty you can make in advance and it has a great showstopping feel to it. I’m off to have another little sliver with a little mulled wine now, yum.