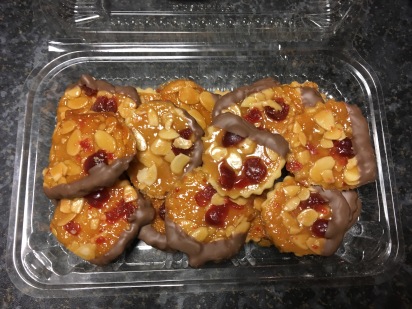 This has to be by far my favourite time of year when it comes to baking and I’m sure every baker feels the same. I have a pile of foodie magazines (mainly GoodFood, Delicious and Good Housekeeping) where I have cornered several recipes that I cannot wait to try. Now if there were just more hours in the day then I could get around to baking them all. So yesterday I made florentine biscuits and I got the recipe from the GoodFood Christmas magazine.

Preheat the oven to 160C, fan. I mixed the butter, vanilla and sugar together until creamy, I added in the flour and cinnamon and combined all the ingredients using a spatula. I formed a ball, well more of a dome and wrapped it in clingfilm and left it in the fridge for about an hour.

While the dough was chilling I made a start on the florentine topping. I melted the butter, golden syrup, sugar and salt in a saucepan. Once it had all melted I took the saucepan off the heat and whisked in the flour, then I stirred in the chopped cherries and flaked almonds. I can confirm that the topping was delicious on it’s own at this point. 🙂 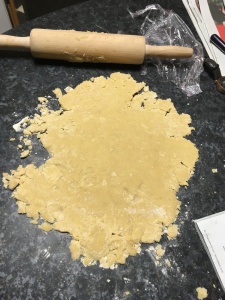 I took out the wrapped dough, it was pretty solid at this point so leave it rest for a few minutes before attempting to try roll it out like I did, well it was more a case of beating it with the rolling pin. In my defense I was pretty tired after being out the night before. 😀 So I eventually rolled out the dough to a £1 thickness and using a 6cm fluted cookie/scone cutter I stamped out around 40 odd biscuits. I placed them onto a baking sheet which was on my brand new baking sheet, I’m loving my new baking sheet. I placed a little dollop of the florentine mix on top of each biscuit and placed them in the oven for about 15 minutes until golden and the mix has melted.

Now when the recipe said melted I was not prepared for the florentine mix to melt so much that all the biscuits practically joined together and created one giant rectangular florentine biscuit. Ok I might be exaggerating a tad, but the mix did spread like crazy. So then damage control began, I let them cool on the tray for about 10/15 minutes and using a knife I cut as much of the melted caramel mix off the edges of the biscuits that I could. They began to resemble the picture in the recipe a little more. I melted the chocolate and then dipped the biscuits into them. The result was a lovely light biscuit, I’m a huge fan of florentine so I was pretty happy with them. Aside from the melted mess in the oven they were worth it.