This is one of my favourite Christmas desserts that has now become a tradition to make every Christmas Eve. I have tried different recipes but I always come back to Mary Cadogan’s recipe on BBC Good Food (http://www.bbcgoodfood.com/recipes/3049/yule-chocolate-log). It’s a really easy recipe to follow and always results in a deliciously moist chocolate log. Normally I would use a cream filling but this year I said I’d make it a proper death by chocolate style log, so I followed exactly what the recipe suggested.

I preheated the oven to 190C, separated 5 eggs and added 140g of light muscovado sugar and 2 tablespoons water to the egg yolks. I whisked them until they were thick enough to make the shape of an 8. 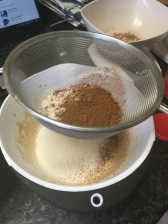 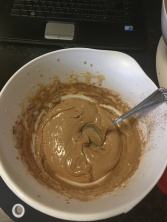 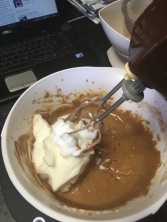 I sifted in 100g of self-raising flour and 25g of Bournville cocoa powder and folded them in using a metal spoon. Next I whisked up the egg whites until stiff and folded them into the chocolate mix in three batches, I used the blades to add as much air as possible. 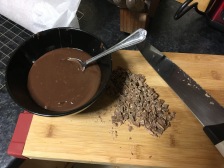 I poured the mixture into the lined swiss roll tray and popped it into the oven for 10-12 minutes until it was firm to touch, I checked with a skewer too. I turned it out onto baking parchment and covered it with a clean tea-towel and left it to cool a little. After about 20 minutes or so I scored the cake along one of the longest sides and carefully rolled it up as tightly as possible with the baking parchment inside also and left the towel over it to cool completely. I made a chocolate ganache, this time with 200g of Menier Milk Chocolate Patissier, 200g of Lindt Lindor bars and 285ml of double cream. I brought the cream to the boil and took it off the hob and added the chocolate into it and left it to cool for a couple of hours. Once cooled I took about a third out and added in 50g of chopped chocolate, I used Cadbury’s Daim as I had some left from the cookies. 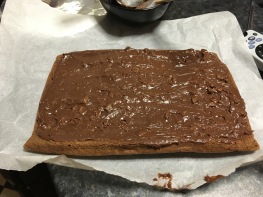 I unrolled the cake and spread this chocolate mix over it. I rolled it back up and cut it at a slant and placed the cut side to the side to create a ‘branch’. I smothered the outside of the cake with the rest of the ganache. I decorated it with some icing sugar and added a few decorations. 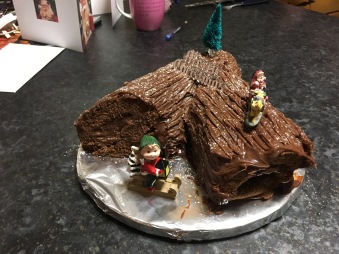 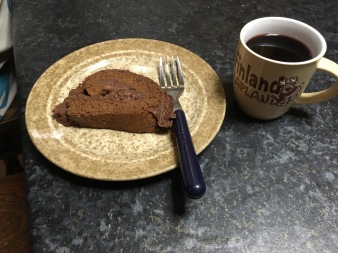 So I was too impatient to wait until Christmas Day to have a slice and cut one pretty much straightaway and had some mulled wine with it. It was lovely and moist and sooooo chocolately, I also loved the extra crunch in the inside thanks to the Daim pieces, yum.