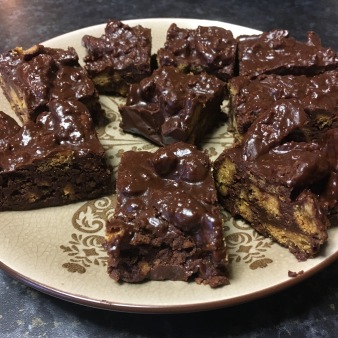 In keeping with the wedding cake theme, the next layer I’ve been experimenting with this week is chocolate biscuit cake. I’ve such a tough life, haha. One of my friends mentioned how she had tasted a biscuit cake recently that had ginger in it so I said I’d try some ginger nut biscuits instead of rich tea biscuits for a change.

The first chocolate biscuit cake is from BBCGoodFood. I halved the recipe using 150g of roughly crushed ginger nut biscuits, 150g of Lindt dark and milk chocolate, 50 of butter and 3tbsps of golden syrup. I melted the chocolate, butter and golden syrup over a bain-marie.

I poured the chocolicious mixture over the biscuits, stirred it around and then left it to cool for a couple of hours. Once it was cool enough I cut it into squares and had a taste. It was quite heavy but there was a lovely warmth from the ginger nut biscuits. The recipe had called for crystallised stem ginger as well which I thought would make it even sweeter plus I ended up buying actual ginger in the shop by accident so it worked out well in the end. It was nice and moist but the bottom was a tad soggy, once I left in the fridge overnight it proved to be perfectly set the following morning and not quite as heavy either.

The next recipe is a friend’s recipe that I’ve used quite a few times, it was even made in a hostel in Argentina minus kitchen scales, which was quite the adventure. I melted 300g of chocolate (quite a mixture of dark and milk), 397g of condensed milk and 100g of butter over a bain-marie.

While waiting for the mixture to melt I chopped up 200g Crunchies and roughly crushed 200g of ginger nut biscuits with a rolling pin, so much fun. 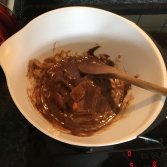 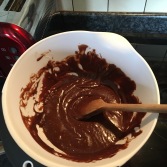 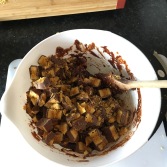 Once the indulgent chocolate mixture had melted I stirred in the biscuits and Crunchies and spooned it into a cake tin and let it cool for a few hours in the fridge.

This is a much more indulgent chocolate biscuit cake and I love the addition of the Crunchie bars too. The ginger has taken more of a back seat in this biscuit cake but I might have to eat another slice just to really be sure. 😀