Two plane journeys, some faaancy plane food and 14 hours later we have arrived in New Delhi. The heat and humidity knocked us back after we left the air-conned airport. It is HOT, HOT, HOT here.

We experienced our first car ride to the hotel, with plenty of beeping, twists and turns, no road markings and not an indicator in sight. We arrived at our hotel, Sunstar, in the Karol Bagh area. We were checked in straight away and given a bottle of water each, which I was tempted to throw over my face never mind actually drink it. The room was lovely and spacious and it had sweet, beautiful air-con in it too. We dumped our things and decided we’d brave the metro into town.

Paths are something of a mystery here in Delhi as people rarely use them, although they’re barely paths to begin with, we ended up taking the longer route to the metro and were asked several times whether we wanted a tuk-tuk but we got there. Once we figured out the map and what route we needed to take it was pretty straight forward, a ticket cost INR 20, so cheap.

We got off at Connacht Place and after chatting to some locals they brought us to a lovely Indian restaurant called 7 States where we ordered some Dal, a sweet curry and some garlic naan, all very tasty and I loved the little dishes they were served in too.

We got chatting to another local when we left and he called a tuk tuk to bring us to the information office with the two elephants to get us a better map. The tuk tuk ride was great craic, great way to get around. The tourist office were very helpful and so we booked a driver for the next day for INR 4000 each. We were a little apprehensive about this but thought sure it’ll be less hassle and by the sounds of it it’s quite tricky to get from one place to another anyways. We headed back to the hotel and chilled for the evening.

The buffet breakfast had plenty to offer, from local curries, naan breads, noodles etc to omelettes, toast and fruit. We had a bit of everything and then went on our tour of Delhi.

Our driver was very friendly, he brought us to see the monkey man statue and Humayun’s Tomb first. The tomb was beautiful and the gardens and ponds were really pretty. We walked around the walls of the tomb and towards another beautiful building and after 40 minutes we were already absolutely melted out of it, it seemed to be much more humid today.

We saw a bride wearing a beautiful sari and she was more than happy to have her photo taken, it had been a month since they got married or it was their wedding in a months time, so they were having a photo shoot there. 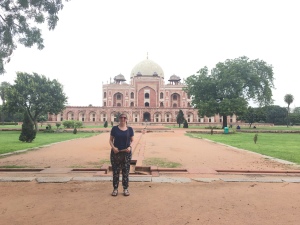 After the tomb we went to Lodhi Garden where we strolled around and took a few photos of another beautiful building, we topped up on water here as even my fan was only blowing hot air in my face at this point, haha.

We had a quick stop off at a Bazar and I priced a few things there such as scarves and pillow cases etc, so that when I went to the market I’d have a better idea of what to expect.

Next we had a little adventure on a rickshaw through the crazy Delhi traffic to the Red Fort. My heart was in my mouth for a lot of that journey, it was a mixture of this is great excitement to we are not gonna fit between those two vehicles or we’re not gonna make it across this road. However we got there and back in the safe hands of our cyclist and he was so helpful too with plenty of tips on how to avoid the so called tour guides inside. We bought our tickets and saw this massive queue, we were told we could skip it and we felt guilty thinking it was because we were tourists but we soon realised that there were two queues, one for men and one for women so we happily skipped ahead.

There were loads of shops on the way with stalls outside displaying some lovely earrings, bangles, scarves, pashminas, harem pants, bags of all sizes and even little genie lamps. We browsed a few of them and then walked around the grounds of the red fort, there were some beautifully intricate buildings there, I particularly loved the white building below, so pretty. We definitely got the most attention at the Red Fort, a lot of the locals were taking our photos some more unsubtly than others mind. Once we were asked to take a photo and we assumed they wanted us to take their photo and nope they hopped in beside us to take our photo. We had a whole family hop in at another point when we were taking a rest on some shaded steps, one guy wanted to take several selfies with us. We didn’t mind for the most part but it can be quite overwhelming and we nearly attracted more attention to ourselves, but once we were on the move again we weren’t as much of a tourist attraction.

As we made our way back through the shops we were tempted to buy a few things. I knew I was going to buy a scarf over here but it’s more of a question of how will I know when to stop? Know the scarf that’s one too many Tanya will be running through my head or what if there’s a prettier one in the next town/city/market. Anyways temptation gave in as there was one beautiful white and blue scarf that kept catching my eye and so I was sold. It was only INR300, so cheap. My friend Claire bought a pair of beautiful drop earrings for INR100. We were delighted with our purchases and off we went to meet our rickshaw driver. We spotted so many beautiful saris again at the Red Fort, the ones below for example were just stunning. 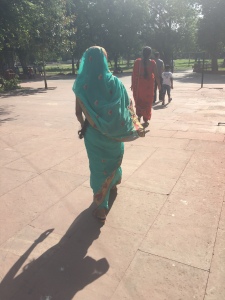 Our last stop was Akshardham but by the time we got there we were told that we weren’t allowed bring in our bags or cameras. If we had known this we would have left our stuff back at the hotel, now there are cloakrooms there that you can leave your belongings into but at this point we were tired, feeling pretty icky because it had been such a humid day and we had done a fair bit of walking, we were definitely a little dehydrated and we hadn’t eaten much other than a banana and a cracker or two so we decided we’d leave it and head back to our hotel instead.

Overall I don’t think hiring a car and driver was really worth it, yes it’s nice to be driven from one place to another and an air-conned car was lovely too but we could have gotten the metro and tuk-tuks there ourselves. Now it would have been a bit more effort but it would also have been a hell of a lot cheaper. I think we also thought that the driver would have been a sort of guide as well but unfortunately he said very little about each place we went to, which was a pity. Anyways nothing ventured, nothing gained. 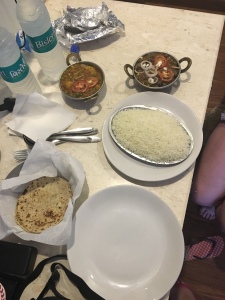 Back at our hotel I basked in the air con and after drinking a lot more water started to feel a little more human again, once we ordered food I enjoyed the best bucket shower ever and sat down to some lovely roti and a potato and peas curry, it was delicious even though the Indian spices were pretty damn spicy. You can see the scarf I bought today in the last pic too, one of many scarves that I will be buying here. Might just end up leaving my clothes behind and bringing a backpack full of scarves back home instead, haha. Once again we relaxed at the hotel and packed our bags for today.

While we were eating breakfast this morning we saw some interesting construction going on across the road, n’able for watching that now, it looked so dangerous! We checked out of our hotel, was a lovely hotel, great service and food and I would definitely recommend it. They ordered us a tuk tuk for INR50 to bring us to Hotel Perfect, which was about a 10 minute walk away but in our defence it had just rained and we would have been some state after walking only 5 minutes with our backpacks on in this heat. So we checked into our hotel and we’re gonna head off to get a bite to eat now. We meet our Intrepid guide and group this evening at 6 and I’m really excited to meet everyone and for the tour to start.

Tomorrow we’re going to see a bit more of Old Delhi, then we’re taking a 19 I hour overnight sleeper train to Jaisalmer where we will pack a small bag to go on a camel trek through the Thar Desert to camp under the stars. So an exciting first few days with the tour. We’re off to check out the local market now.